We receive countless inquiries from parties who “just want a blog like It’s Nice That” without them fully understanding the nature of what is actually involved in the continuous curation of digital content. We asked writer Sarah Chapman to visit the It’s Nice That studio to meet some of the unsung heroes who, collectively, we believe are the secret to the success.

It’s Nice That: what is it? 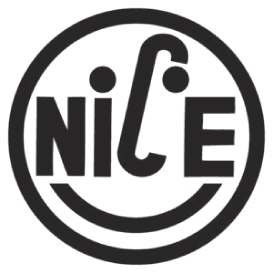 “It’s not about any of us, here [in the studio]. It’s about everyone around us; everyone that we cover.”

Will Hudson smiles. “Never call it ‘a blog’ in our presence,” he says.

Will and Alex are the directors of It’s Nice That [1]. Though best known for their, uh, website, the It’s Nice That stable also publishes a quarterly magazine and organises events. The duo also run a creative agency called New Studio London [2].

I am joined, around a large table at It’s Nice That’s east London office, by online editor Rob Alderson, magazine editor Alex Moshakis and events project leader Maya Davies. Others sit nearby, tapping away at their computers.

“When you start to have a bit of success, you have to make a call about whether it’s a hobby or it’s a business,” Alex Bec says honestly, in relation to It’s Nice That’s beginnings and subsequent evolution. “It could just be me and Will. It wouldn’t be better, but life would be simpler. There has been a conscious decision: we want this to be something bigger that just the two of us.” 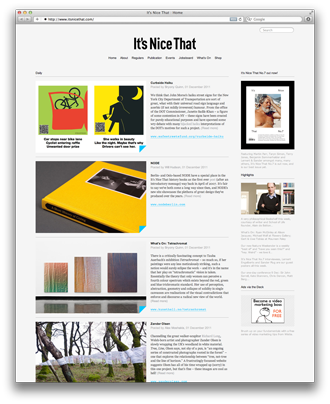 The It’s Nice That homepage circa 2011 where curated content has been king since 2007.

It is bigger. Much bigger. The mission of It’s Nice That is to champion creativity or, as Maya puts it: “good things; good projects; good people.” In that sense, then, the nebulous nature of the network of contacts and collaborators, and indeed those who have been covered by It’s Nice That, makes them a force to be reckoned with.

Alex Bec is unassumingly modest. “It’s not about any of us, here [in the studio],” he insists. “It’s about everyone around us; everyone that we cover. It happens to be us, sort of, manning it logistically.”

To suggest that It’s Nice That merely handles logistics is something of a humble understatement. Propositions that appear to be simple are often powered by something altogether more significant or sophisticated. The challenge is making it seem so easy; like the metaphorical swan paddling furiously beneath the water.

“You have to be nimble. In five years, we’ll be working on something that we definitely haven’t thought of yet.”

Online editor Rob is no stranger to this phenomenon. “Things, outwardly, might seem straight forward, but when you break it down, it’s complicated. We update the website between three and nine times each day, 51 weeks each year,” he says. “It’s not like other websites and blogs where there are no posts for two weeks because someone’s on holiday. [Will and Alex] have invested in staff.”

It becomes obvious that the continued success of It’s Nice That is inextricably linked to the recruitment of brilliant people. Not only have Will and Alex spent their hard-earned on these individuals, they have invested their trust in them. 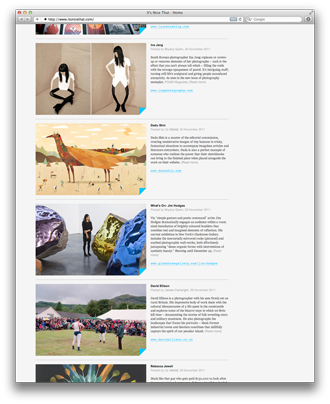 Appearance can be deceptive: Behind the now classic chronological scream of articles comprises of 4,806 written, edited, curated and published posts.

“When new people join,” explains Will, “it’s not about them being on the track we’re already on. It’s more about asking them where they want to take It’s Nice That.”

Rob, who joined last July, sees it as creative freedom. “Everyone who comes on board buys into what we do here at some level,” he says, “but within that, you’re also given the space to explore and experiment.”

We arrive, following more musing, at the notion of responsibility. Will and Alex feel they owe it to their staff to allow them to shape the future of the business, but it’s also apparent that the whole team feels a wider responsibility to their audience.

“That’s why we don’t post everything,” says Will. “If we were to do that, then the reliance on our curatorial skills is gone. People wouldn’t believe in us any more. If the belief is gone, that’s us gone too.”

“We update the website between three and nine times each day, 51 weeks each year. It’s not like other websites and blogs where there are no posts for two weeks because someone’s on holiday.”

This sense of responsibility to the audience is also manifested in It’s Nice That’s approach to communicating change. Having introduced paid-for content and, most recently, advertising to the magazine, the team feels it’s their duty to explain these decisions to their readers.

“Apart from being explicit and actually saying it has happened,” says Alex Moshakis about the advertising, “we’re explaining that the reason we have done it is to improve the magazine. It’s so that we can cover more stuff, and cover it in better ways.”

The same is true across the business. “We can’t just take massive dividends,” says Alex Bec. “We’re investing it back in.” 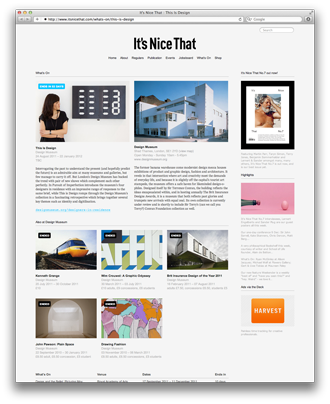 The ‘What’s On’ section is just one of the additional content streams that It’s Nice That have added over the years in response to needs and opportunities they’ve identified along the way.

Progress is fast, too. “There is a real can-do attitude and because there is such a range of skills, we can accomplish a lot internally,” says Maya. “Things happen really quickly.”

With ambitions to add more individuals to the studio, Alex Bec speculates on what’s next for It’s Nice That. “You have to be nimble,” he says. “In five years, we’ll be working on something that we definitely haven’t thought of yet.”

That, he ponders, could be the reason why he and the others get out of bed in the mornings: the excitement and challenge of the unknown. “The people in this space, and the people around us, they’ll be deciding what happens in the future,” he says.

At present, It’s Nice That is a website, a magazine and events. More importantly, though, it is seven diligent people who are dedicating their lives to sharing everything that is excellent in the creative industries. In doing so, they’re rightly putting second year students on the same stage as established ad agencies.

“We describe It’s Nice That as meritocratic,” [3] says Will, pronouncing each syllable carefully. “Is that actually a real word?”

Thanks to
Everyone at It’s Nice That

Beginning, understanding and perfecting the processes of selling online.

The low-fi tools, techniques and tricks behind the high-end items.

From ideas to laser to your door. CLC make making ideas easy.

Publishing beautiful and tangible books in an allegedly dying industry.

Listen to the interview